Flurry of new polls sez Rick is the top dog...

Rick is the new front runner nationally... which is a scary place to be... but a good place to be as well... you can bet a pretty penny the attacks will only amplify against Rick from all corners... including some on not really the far right so much as the "aligned with another candidate" right.

Gallup is the gold standard, and they have Rick truly surging (link). Excerpt follows...


Shortly after announcing his official candidacy, Texas Gov. Rick Perry has emerged as rank-and-file Republicans' current favorite for their party's 2012 presidential nomination. Twenty-nine percent of Republicans and Republican-leaning independents nationwide say they are most likely to support Perry, with Mitt Romney next, at 17%. 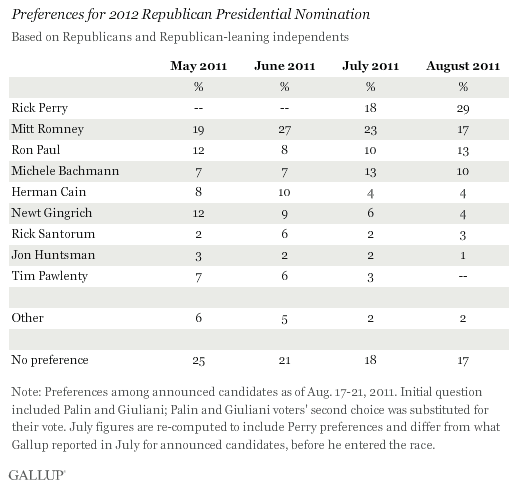 Perry now leads the field in all five categories polled this month: first choice, most electable, second choice, best at dealing with the economy, and best at keeping Washington spending under control — often by a large margin.
Perry is the top choice for 29.3 percent of Republicans, handily trouncing Michele Bachmann’s 17.0 percent and Mitt Romney’s 11.1 percent.
But Perry has not just captured the hearts of Republicans; he has also captured the minds of those who are pragmatically looking not just for a nominee they like, but for one who can beat President Barack Obama. He is also considered far and away the most electable, with 46.5 percent naming him the most viable candidate to beat the incumbent president. Romney takes just 19.8 percent of the vote in this category, a sharp drop from July, when he led in this category with 33.5 percent. Michele Bachmann’s share has dropped to just 9.6 percent, falling precipitously from 21.1 percent in July.
That’s particularly problematic for Romney. 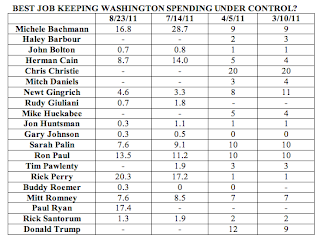 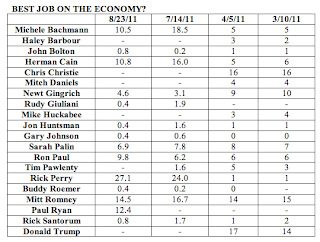 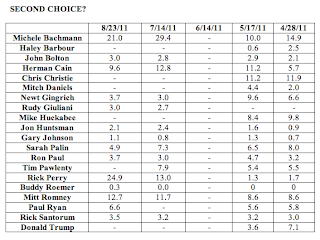 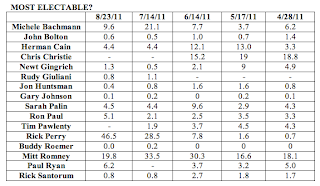 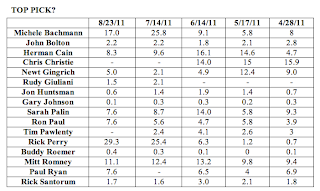 Rick as a second pick beats everyone else's first pick.

PPP is one I hate... they oversample Democrats and do a really poor job in Texas in particular... but they also have Rick surging in Iowa and nationally (link). Excerpt follows...


In PPP's first national poll since Rick Perry's official entry into the Presidential race he's jumped out to a double digit advantage. Perry's at 33% to 20% for Mitt Romney, 16% for Michele Bachmann, 8% for Newt Gingrich, 6% for Herman Cain and Ron Paul, 4% for Rick Santorum, and 3% for Jon Huntsman.

Conservative voters have been looking for a candidate that they can rally around and Perry's filling that role. Romney continues to lead with the small portion of voters describing themselves as moderates at 27% t0 20% for Bachmann and 15% for Perry. But Perry gets stronger and stronger as you move across the ideological spectrum. With 'somewhat conservative' voters Perry leads by 15 points with 38% to Romney's 23% and Bachmann's 11%. And with 'very conservative' voters the advantage expands to 22 points with him at 40% to 18% for Bachmann and 14% for Romney.

Rick looks like he may be the guy... and in match ups with Obama he is usually about neck and neck... although Rick was actually leading among independents... and Rick seems to do better among likely voters than just casual registered voters...

The game plan now might be to keep Rick on a slow and steady pace. Don't overexpose him. Fight back all the smears and lies from the left and right alike.

A big national lead is important, but a small lead in Iowa can quickly turn into a 4th place finish in the Iowa Caucuses. New Hampshire also remains an up hill climb for Rick, although his fiscal message he stuck with during the 2010 election in Texas could play very well there. South Carolina is likely his for the taking. Florida may be close, but Rick should do well with voters eager for jobs and an improved economy. Nevada, the same....

A few big hurdles are on the way. Debates. The expectations on Rick will be extremely high to perform well at the upcoming forums and debates. He may be underestimated since he didn't debate Bill White, but people falsely claiming off hand that "Rick never debated in 2010" are just not telling the truth... he debated twice in the primary and did well enough to put Kay away by 20+ percentage points and avoid a runoff...

The final big hurdle is money. Rick needs to raise a lot of money and have a lot of money in the bank... he needs to get his super PAC operations in order. He still has a lot of staff to hire in various states and back home in Texas, and he still has a lot of television commercials to produce and air. Those take money. Money will be a big driver of this race, and if Rick can show a solid number after this quarter in which he got a late start he could make it a two person race with Romney... if he does that he wins the nomination even with occasional minor gaffes and errors and missteps... it would just be too difficult for anyone else to overcome that. Still... Romney will have more money than Rick and will likely decide soon to start attacking... but Rick has withstood a lot of money in negative ads spent against him over the years and done just fine...
Posted by Texas-Based Media Junkie at Wednesday, August 24, 2011

Hey now, campaign characters. Be nice. I know a lot of you on both sides, so I don't want any overly foul language, personal attacks on anyone other than the candidates themselves, or other party fouls. I will moderate the heck out of you if you start breaking the bounds of civility.

About Rick vs. Kay's Author

Texas-Based Media Junkie
Texas, United States
Both Texas born and bred AND a proud (some might say too proud) Republican, I have a keen interest in the Texas Governor's race in 2010. I wish to remain anonymous because I have good friends [read: GOOD SOURCES] on both sides of this race. Oh and I am for Rick. Kay simply pissed me off too many times.